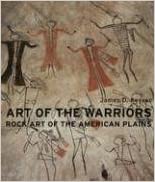 Art of the Warriors: Rock Art of the American Plains by James Keyser

"We were about 350 warriors when we met the Snakes on the plains of the Eagle Hills. Both war parties made a great show of their numbers, and after singing war songs they sat down and placed their large shields before them. We did the same but our shields were not so many, and some had to shelter two men. Our iron-headed arrows stuck in their shields. On both sides several were wounded, but none lay on the ground. In those days such was the result, unless one party was more numerous."—Sahkomaupee, Cree warrior, as told to British explorer David Thompson in 1787

In North America, Plains rock art is second only to that of the Southwest in richness, complexity, and diversity of content. Ranging from finely drawn polychrome shield-bearing warrior pictographs to crudely pecked abstract petroglyphs, the art includes the most sophisticated portraiture ever done by native rock artists. Panels include hunting scenes, family groups, supernatural beings, and battle scenes that can be read well enough today to identify who killed whom more than 150 years after the event. The art spans at least 5,000 years, with Archaic-period examples serving as some of the earliest well-dated art on the continent.

Art of the Warriors is the first book to fully address and reproduce art from this period. An acknowledged expert in the field, James Keyser has written a book exploring this fascinating art both for specialists and nonspecialists alike. Frequently, archaeology from the Plains has focused on the subsistence and technology of the previous inhabitants—what they ate, how they killed and processed their food, what tools they used. Missing, in this approach, are aspects of American Indian culture—including their religious and world views. Studying their rock art gives a partial glimpse into these aspects of their culture. Rich with color reproductions of the art, historical photographs of Plains Indians, and many first-person accounts, Art of the Warriors is a stunning introduction to Plains art and culture.