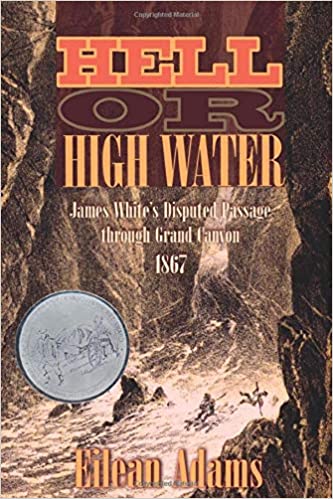 Although John Wesley Powell and party are usually given credit for the first river descent through the Grand Canyon, the ghost of James White has haunted those claims. White was a Colorado prospector, who, almost two years before Powell's journey, washed up on a makeshift raft at Callville, Nevada. His claim to have entered the Colorado above the San Juan River with another man (soon drowned) as they fled from Indians was widely disseminated and believed for a time, but Powell and his successors on the river publically discounted it. Colorado River runners and historians have since debated whether White's passage through Grand Canyon even could have happened.

Hell or High Water is the first full account of White's story and how it became distorted and he disparaged over time. It is also a fascinating detective story, recounting how White's granddaughter, Eilean Adams, over decades and with the assistance of a couple of notable Colorado River historians who believed he could have done what he claimed, gradually uncovered the record of James White's adventure and put together a plausible narrative of how and why he ended up floating helplessly down a turbulent river, entrenched in massive cliffs, with nothing but a driftwood raft to carry him through.