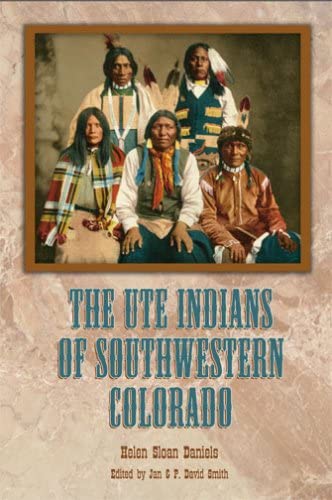 The Ute Indians of Southwestern Colorado

Helen Sloan Daniels, now deceased archeologist, anthropologist, and historian from Durango, Colorado, wrote The Ute Indians of Southwestern Colorado in 1941 as a project for the Durango Public Library. It was one of the first popular books written on the Ute Indian culture. Unfortunately, Helen had to mimeograph the book and result was a hard and sometimes impossible to read. The original printing of the book soon became very rare and was not widely distributed.

Western Reflections has edited and retyped the book and has included some of the original drawings, making this rare work available to the general public. It is an interesting (and sometimes shocking) book, not only about the Ute culture, but also about the way this tribe was viewed by local whites in the 1930s and 1940s. Daniels includes quite a bit of material about the Utes from the 1880s and 1890s. And, the book shows the split in white attitudes towards Native Americans during both timeframes. Much of the information in this book cannot be found elsewhere. It is a must read book for anyone interested in Ute culture, history or artifacts.