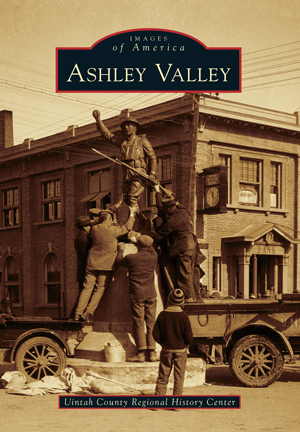 Situated within northeastern Utah's mountainous Uinta Basin, the Ashley Valley takes its name from William Ashley, a trapper who passed through the area in 1825. Both beautiful and rugged, the Ashley Valley's landscape required a lot of grit from its first settlers. An early expedition party sent out by territorial governor Brigham Young called the area unfit for settlement. This delayed permanent American settlement until 1876, when a few hardy families formed communities in the area, including Ashley, Vernal, Maeser, Dry Fork, Glines, Naples, Davis, and Jensen. The valley was rich in minerals and oil and saw its share of boom-and-bust cycles, as miners and oil-workers struck out to find fortune and left facing government regulations. The Ashley Valley pioneers were a stalwart, hardworking mix of settlers, farmers, miners, and other hardy folk who left a rich legacy. Today, as visitors come over the valley hill, they will encounter a community with a developing oil and gas industry, modern growth, and traditional small-town appeal.