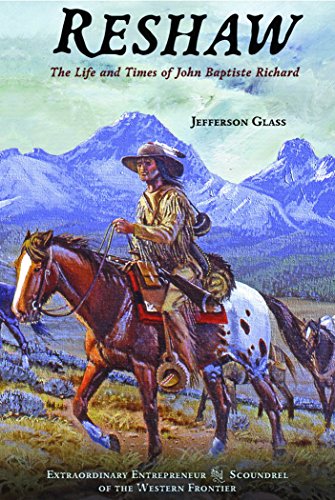 Reshaw: The Life and Times of John Baptiste Richard by Jefferson Glass

John Baptiste Richard known as Reshaw the French pronunciation of his last name was both an adventurer and an opportunist. The early American West was changing fast, and Richard jumped on opportunities before most men even realized they existed.

He was a fearless adrenaline junkie, always on the edge of danger in his many personifications. Richard owned several trading posts and was not above illegally trading whiskey with Indians. He built the first bridge to span the North Platte River, which washed away in high water. Despite this failure Richard continued to see the money-making possibilities of a toll bridge and rebuilt near present day Casper. From there he had a front row seat for the Westward migration. His historical contributions were not limited to Wyoming as he was a merchant in Colorado during their gold rush and made frequent trips to Pueblo for supplies for his trading posts. Richard could also be considered Wyoming s first rancher.

Richard was right in the middle of the action and from that vantage point he took part in some of the greatest events of early Western history.