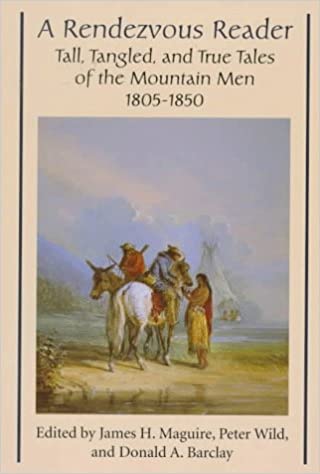 The early plans for Mount Rushmore called for blasting heroic likenesses of mountain men--Kit Carson, Jim Bridger, and John Colter-—into the solid mountain granite of South Dakota. Readers of this colorful volume will see the heroics and the brutally rugged individualism that made these fur trappers candidates for legend and infamy.

The accounts of the mountain men are spun from the experiences of a nation moving westward: a trapper returns from the dead; hunters feast on buffalo intestines served on a dirty blanket; a missionary woman is astounded by the violence and vulgarity of the trappers’ rendezvous. These are just a few of the narratives, tall tales, and just plain lies that make up A Rendezvous Reader.

The writers represented in this book include a dyed-in-the wool trappers, adventuring European nobles, upward-gazing eastern missionaries, and just plain hacks who never unsheathed a Green River knife or traveled farther west that the Ohio River. What these writers have in common is that all of them, whether they dealt mostly in fact of entirely in fantasy, helped to create a uniquely American icon: the mountain man.

Though A Rendezvous Reader will certainly be of interest to the historian and the historically curious, the true purpose of this anthology is to bring together in one volume the liveliest most readable accounts by and about the mountain men. Whether you sample or devour this anthology of mountain horrors and delights, it is a book guaranteed to entertain as well as inform.