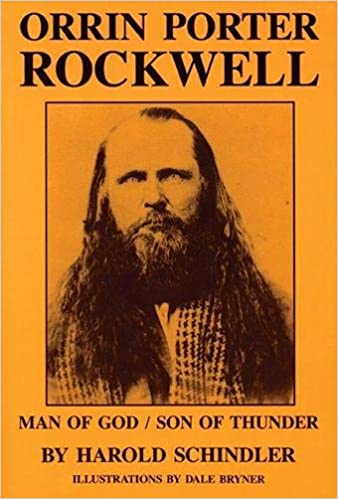 The legend of the Destroying Angel of Mormondom was well established by the time of his death, of natural causes, in 1878. Travelers sang ballads about him as they gathered around their campfires at night. Mothers used his name to frighten children into obedience. He was accused of literally hundreds of murders, all in the name of the Mormon Church.

Yet behind all the myth was a man, a human being. Orrin Porter Rockwell believed in his prophet, Joseph Smith. He spent most of a year chained in an Independence dungeon for his belief, then walked across Missouri to Nauvoo, stumbling into Joseph’s house on Christmas Day. Joseph said to him then, “Cut not thy hair and no bullet or blade can harm thee,” and the legend was born.

Rockwell continued to serve the leaders of his church—as hunter, guide, messenger, scout, guerilla, emissary to the Indians, and lawman. He traveled thousands of miles, raised three families, accumulated land and wealth—and favorably impressed almost everyone who met him. But although he walked with presidents and generals, scholars and scoundrels, in a life lived at the center of many of the great events of the American frontier, he has remained an enigma, a source of continuing controversy.

Harold Schindler’s remarkable investigative skills led him into literally thousands of unlikely places in his search for the truth about Rockwell. Dale L. Morgan, one of the west’s foremost historians, called the first edition “…an impressive job of research, one of the most impressive in recent memory, in the Mormon field. Mr. Schindler has shown great energy and sagacity in dealing with a difficult, highly controversial subject; and he has also made maximum use of the latest scholarship and newly available archival resources.”

But the author was not satisfied until he had probed even more deeply, and this revised and enlarged second edition contains greatly expanded documentation as well as textual additions that flesh out the characters and events of this classic drama of early America.