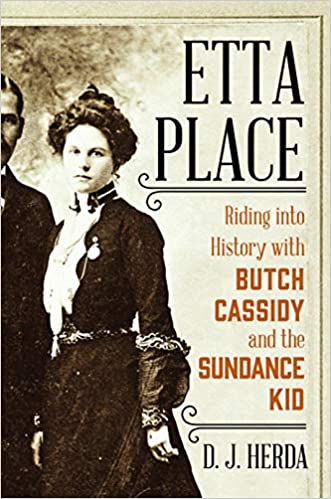 The Pinkertons knew her as "Ethel,” "Ethal,” "Eva," and "Rita" before finally settling on "Etta" Place for their wanted posters.

After Sundance introduced her to Robert Parker (Butch Cassidy), the three joined the rest of their Wild Bunch gang and set off on a spree of bank, stagecoach, and train robberies. With the law hot on their heels, they rode up to Robber’s Roost in southwestern Utah where they laid low until word reached local authorities of their whereabouts.

On the run again, Place accompanied Longabaugh to New York City where on February 20, 1901, she sailed with Butch and Sundance, posing as Etta’s fictional brother "James Ryan," aboard the British ship, Herminius, for Buenos Aires.

On December 19, 1904, Place, Longabaugh, Parker, and an unknown male robbed the Banco de la Nacion in Villa Mercedes, four hundred miles west of Buenos Aires. Pursued by armed federales, they crossed the Pampas and the Andes and returned to Chile, but Place had grown tired of life on the run and deeply lamented the loss of their ranch and the promise of stability it had held for her. In June 1906, Longabaugh accompanied her from Valparaiso, Chile, to San Francisco, where she kissed him goodbye for the last time before he returned to South America and infamy.