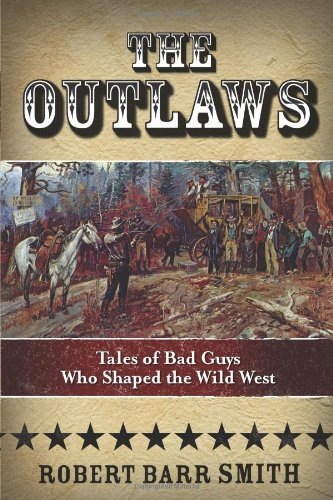 The Outlaws: Tales of Bad Guys Who Shaped the Wild West by Robert Barr Smith

The people who pushed west were mostly ordinary folks, the guts of the young United States, tough, ambitious, hardworking, and anxious to leave the world better for their kids than it had been for them. Those who did not come of that hardy stock did not last. With them came the trouble-makers, to everybody’s sorrow. Some of them were already running from the law someplace else. Others were simply dishonest, looking for a time and place to blossom into full-blown hoodlums. Some of the young people emulated them: there was some illusory swagger in being a hoodlum, witness the nicknames they carried around . . . many of which they had invented themselves, a sort of phony glory. This collection of short, action-filled stories of the Old West’s most egregiously bad bad guys caught in the act of mayhem, distraction, murder, and highway robbery, includes famous names like the Dalton gang, lesser known bandits like Kaiser Bill Goodman, and many more. The book will include archival illustrations and photographs of the shady characters and the scenes of their crimes.