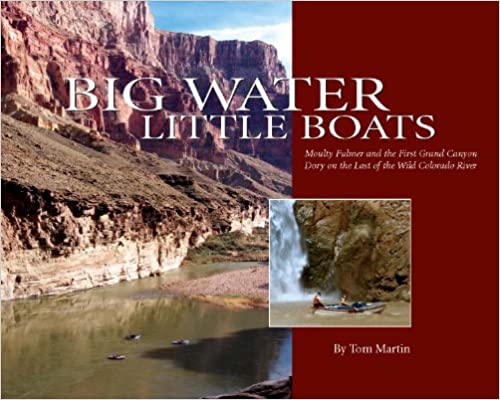 Moulty Fulmar was bitten by the river running bug during a San Juan River trip in 1942. After a chance meeting with a McKenzie River dory builder, Fulmar constructed his first dory and rowed the San Juan in 1947. Traveling through Grand Canyon in 1948 on a Norm Nevills expedition, Fulmar met Colorado River historian Dock Marston and they went on to run rivers together and correspond for the next thirty years. Fulmar built his second dory, the Gem, specifically for big water. Joining forces with Pat Reilly in 1954, they ran the Grand Canyon five times in home-built boats. Their adventures included rowing the wild Colorado River in 1957 on 125,000 cubic feet per second, one of the highest flows in the last century. Using historic photos, river logs, letters and interviews, author Tom Martin recounts the voyages of a number of unsung river runners during the transformation from Grand Canyon expeditionary river running into today's whitewater recreation. Big Water Little Boats chronicles the start of the park's river running permit system in 1955, the construction of Glen Canyon Dam, and the explosion of river running that occurred after the completion the dam in 1963.