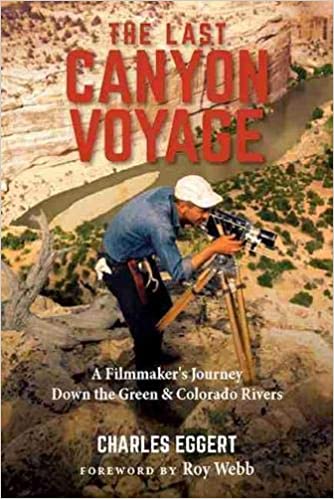 In 1955 photographer Charles Eggert and renowned river guide Don Hatch set off down the Green River with six others to duplicate the 1870s journey of John Wesley Powell. With dams soon to be built at Flaming Gorge and Glen Canyon, they planned to film the voyage and be the last to travel these waters before the landscape changed forever. Eggert’s film A Canyon Voyage debuted successfully after the trip, but his written narrative of the river, its landscape, its people, and the adventures of the crew was never published.

This book finally brings Eggert’s writings out of the archives and into the public eye. With his keen photographer’s vision and colloquial voice, Eggert describes canyons and towns now deep under water as he tells the story of friendships forged upon the rapids and currents of the rivers. Roy Webb’s foreword provides historical context; river historian Alfred E. Holland Jr. introduces Eggert, the man who transformed into an environmentalist after visiting the West; and Sarah Holcombe’s afterword looks at what transpired in the lives of all eight crew members after the journey. Color and black-and-white illustrations further enliven the text. An engaging read, this is an important piece of river history that also shines light on Eggert’s tremendous influence as a conservation cinematographer.